Female breadwinners on the rise in Europe

About one in three women in cohabiting or married couples in the UK earned more than 50% of their household income in 2010, according to the Family Resources Survey, up from one in ten in 1980.

But it is not easy to give a precise estimate of the number of female breadwinners. The
number changes significantly depending on the definition that we use to identify femalebreadwinner households. For example, based on analysis in Luxembourg, if we consider as breadwinners those women who earn at least 60% of their household income, female breadwinners only represent one in five couples. 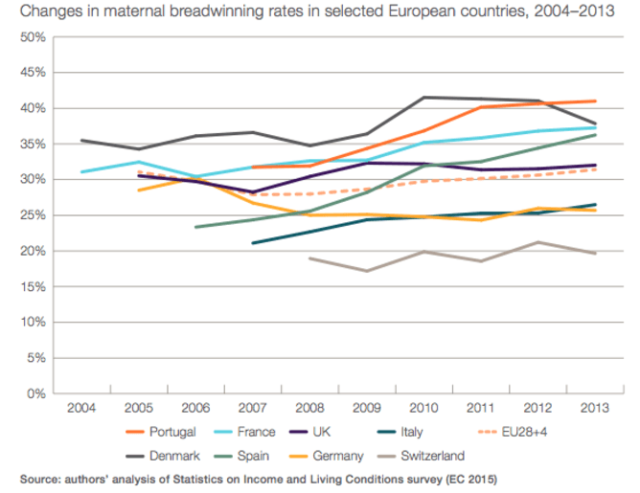 A first type of female breadwinners is represented by single women who, when employed, by definition earn 100% of their household income. Single mothers belong to this category.

A recent study on maternal breadwinning by the UK think-tank the Institute for Public Policy Research showed that there are about 2m female breadwinners with dependent children in Britain. Of these, 44% are single mothers and the remaining 56% are in a partnership.

Breadwinner mothers – both with or without a partner – tend to be aged 40 and over, have a university education and are mainly employed in the service and public sectors. The highest prevalence of breadwinner mothers is found in Wales, London and the North West.

There are two distinct factors driving the unprecedented increase in the number of femalebreadwinner couples: women’s career ambitions and economic necessity driven by men’s unemployment or underemployment.

It would be great if all families with female-breadwinners were the result of a joint couple decision. This would be a sign of changing norms regarding the role of women and men toward gender equality. But this is not necessarily the case.

In fact, a second category of female-breadwinner families consists of households where both partners have low levels of education, belong to the low or middle-income groups and have difficulties in making ends meet. Being a female-breadwinner family is rarely a spontaneous choice in this case. Rather, it is driven by economic necessity.

Not surprisingly, this category of female-breadwinner couples increased substantially during the years of the 2008 economic crisis in those countries whose economies were especially affected by the recession, such as Southern European countries, Ireland and some Eastern European countries. In these countries, an increasing number of low-income households have become more dependent upon women’s labour income due to declining real earnings and increased unemployment in the male-dominated sectors.

If men are more involved in childcare and housework than they used to be, breadwinner
women still contribute more housework than men. Some men strongly believe that a careeroriented woman should have a partner who bears the burden at home, just like breadwinner men always had in the past. Other men suffer from symptoms of depression when they are out-earned by their partner and are more likely to have extramarital affairs. Female-breadwinners couples challenge the logic of the traditional male-breadwinner and female-homemaker model of the family. Because it is a relatively new phenomenon, more research is needed on the social and demographic consequences of this ongoing rise in female breadwinners